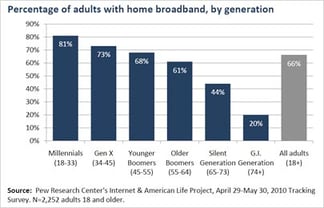 Why is social media becoming such a popular marketing tool? Because the once large generation gap between young adults and older adults who use social media is quickly closing in. Social networking use among internet users ages 50-64 grew by 88%–from 25% to 47% between April 2009 and May 2010. The exponential growth of social media users across all ages has swung the doors wide open for marketers. With a larger and more diverse market online, as well as the advanced and innovative marketing vehicle that social media is, more and more businesses are hopping on the social media bandwagon.

If businesses refer to social media as consumer-generated media (CGM), allowing the creation and exchange of user-generated content, then the giant melting pot of users that utilize social networking sites are a direct target for marketers. Social media allows users the ability to connect, build, create, innovate, shape and change the way we communicate. This allows marketers to do the same with their marketing techniques and campaigns.

While the younger generation still leads the age groups in internet and social media use, the older generations are discovering a world where they can do a myriad of things from their computer. Even though seniors still rely on email as their main form of online communication, they are quickly finding out that social network sites allow them to reconnect with people from the past, find support communities, or connect with younger generations — all of which are driving social network site use among older generations.

Here are some other interesting social media generation facts:

Social media is bridging the generational gaps. There are few other spaces—online or offline—where tweens, teens, sandwich generation members, grandparents, friends and neighbors regularly intersect and communicate across the same network. This is why social media has become such a sought-after marketing technique for all different types of companies and businesses, from financial institutions to restaurant organizations to real estate investors. Social media is not a fad. It is not a craze that will eventually fade once the perception of its value depletes. This is because its value will not deplete. It will grow in worth and utility and remain a fundamental way to communicate. Social media is still maturing, and will continue to develop and extend into all generations. Give your business the edge and take advantage of the advanced marketing opportunities that social media gives you and your business!